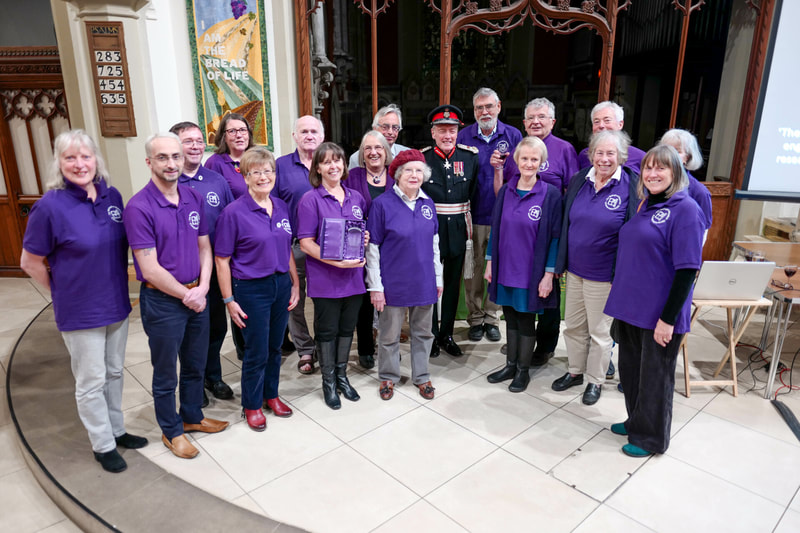 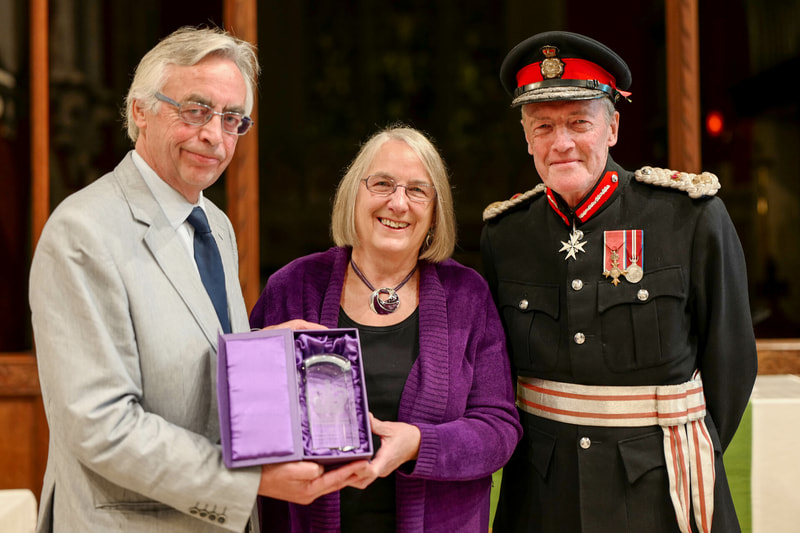 The Wallingford Historical and Archaeological Society (TWHAS), a group of local volunteers, has been honoured with the Queen’s Award for Voluntary Service, the highest award a voluntary group can receive in the UK.

The award evening for the Queen's Award for Voluntary Service made to The Wallingford Historical and Archaeological Society (TWHAS), was attended by over 100 TWHAS and Museum volunteers. The Lord Lieutenant of Oxfordshire, Tim Stevenson OBE CStJ,  presented the award to Judy Dewey (Vice-Chair of TWHAS and Curator of Wallingford Museum) and Stephen Capel-Davies (Chairman of TWHAS and Wallingford Museum). Honoured guests included The Mayor of Wallingford Councillor Lee Upcraft, The High Steward of Wallingford Ken Lester, and three Deputy Lord-Lieutenants: Brian Crossland, Robin Buxton and (newly appointed) Lynda Atkins.

Judy Dewey gave a short talk about the work of TWHAS from 1973-2019.
The Lord-Lieutenant outlined his role and the significance of the  Queen’s Award for Voluntary Service.

The Award made was an engraved domed glass crystal, and a signed certificate from Her Majesty the Queen. The award is to The Wallingford Historical and Archaeological Society for 'Engaging the community with local history through research, archaeology, publications and its museum.'


Background information:-
TWHAS was formed in 1973 in response to development pressures which threatened the town’s historic and archaeological heritage. Throughout its 46 years TWHAS has brought alive Wallingford’s rich history by research, archaeology, publications, talks and exhibitions. From the very beginning members volunteered their relevant skills to engage the community with archaeology and history through digs and exhibitions revealing the town’s history. This led to the need for a permanent Museum to house artefacts and present displays, so in 1981 TWHAS founded Wallingford Museum. This has always been run entirely by volunteers, is primarily self-funded and managed jointly with TWHAS.

TWHAS has always worked closely with other organisations, in particular by the long-running Burh to Borough Project with Leicester, Exeter and Oxford Universities which has raised the awareness of Wallingford’s rich medieval history from the footnotes to the headlines. Emerging from this has been the first ever Urban Test Pit programme, known as the TWHAS Garden Archaeology Project. This has investigated the profile of archaeology beneath Wallingford  through digging test pits in residents’ gardens and is now approaching its 100th excavation. This has allowed the whole community to become involved, including a wide spectrum of people, whatever their age or ability.
​
The results of TWHAS work are displayed in Wallingford Museum and have led to numerous conferences and publications.

In May, representatives from TWHAS attended a garden party at Buckingham Palace, along with other recipients of this year’s Queen’s Award for Voluntary Service.
TWHAS is one of 281 charities, social enterprises and voluntary groups to receive the prestigious award this year. The number of nominations and awards has increased year on year since the awards were introduced in 2002, showing that the voluntary sector is thriving and full of innovative ideas to make life better for those around them.

The Queen’s Award for Voluntary Service aims to recognise outstanding work by volunteer groups to benefit their local communities. It was created in 2002 to celebrate the Queen’s Golden Jubilee.  Winners are announced each year on 2 June – the anniversary of the Queen’s Coronation. Award winners this year are wonderfully diverse.  They include volunteers helping people overcome mental health problems through sport, volunteers using caravans as mobile cafe/information centres in geographically remote locations and another group mentoring children who have a parent in prison.

Judy Dewey, founder member of TWHAS and Wallingford Museum’s Curator, says:
‘We are all thrilled that the dedication of our team of volunteers over so many years has been given this special recognition. We are all very proud of Wallingford’s unique history and take great pleasure in sharing it with the community through our activities and museum. We have many long-serving volunteers but we are very pleased to be constantly welcoming new people who are keen to join in and keep the impetus going. This award is a wonderful tribute to the whole team’s continuous hard work and commitment’